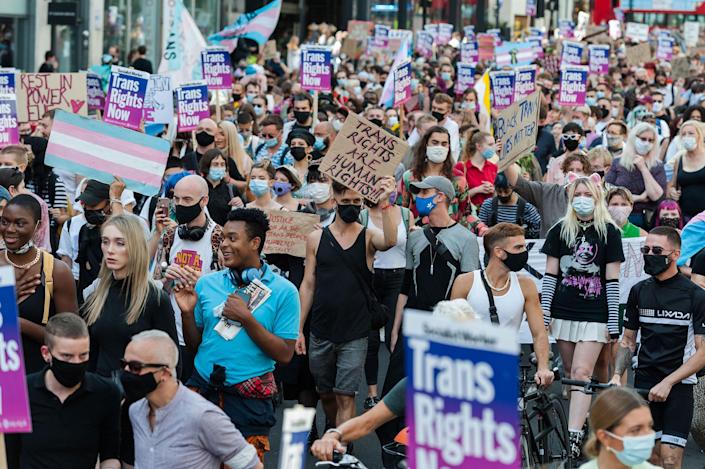 A coalition of 19 LGBT+ organisations led by Stonewall and supported by the Good Law Project,  have submitted evidence to the UN, calling for the Equality and Human Rights Commission (EHRC) to lose its ‘A’ rating.

In a 19-page submission to the Global Alliance of National Human Rights Institutions (GANHRI), Stonewall said that they wanted the EHRC’s status as an independent group revoked, arguing that the EHRC has become “excessively” influenced by the UK government in the appointments of the chair and board members, who are chosen by the Minister of the Government Equalities Office, Liz Truss.

On Stonewall’s decision, Chief Executive Nancy Kelley commented “the politicisation of the UK’s human rights body has placed trans people in the firing line, but this attempt to create a hierarchy of human rights in the UK is a very real threat to everyone, particularly those of us protected by the Equality Act.”

In response to the move, the EHRC’s Chief Executive Marcial Boo insisted that “instead of criticising the statutory regulator that exists to protect the rights of everyone in Britain, campaign groups should work with us to identify discrimination against LGBT people, so we can take action together to stop it.”

Transphobia at the EHRC

This comes following two recent statements from the EHRC that were widely criticised as transphobic. One called for Scotland to pause plans to make it easier for people to change their sex on their birth certificate and the other called for the Government’s upcoming ban on conversion therapy to exclude trans people from its scope.

An increasing amount of evidence has emerged in recent weeks, showing that the EHRC has been actively adopting a gender critical stance. Emails leaked to Ben Hunte, a reporter for VICE showed that executives of the Commission had met with anti-trans lobbyists from the LGB Alliance and Fair Play for Women. Further reports showed that a leaked guidance pack from the EHRC dated from the end of 2021 advised businesses and other organisations to “protect women” by barring trans people without a gender recognition certificate (99% of trans people) from their single-sex spaces.

There have also been reports that staff at the EHRC have been complaining of a growing anti-trans culture, with some quitting their posts and others considering strike action.

A Change of Culture

The submission argues that since Liz Truss’ appointments to the EHRC took up their roles, there has been a marked change in the EHRC’s stance on trans rights. In 2018, the EHRC said that it was its “firm legal view” that reform of the Gender Recognition Act would not affect women-only services, a view that was reiterated by the Commission in 2020. However, in January 2022, the EHRC called for Scotland’s plans to be paused, citing concerns around single-sex services, without elaborating on what these concerns were.

A former employee of the EHRC told VICE News “I was seeing our upcoming publications and guidance pushing for trans rights being changed – or completely scrapped and shelved permanently – meanwhile the Board was building links to anti-trans groups. It was awful.”

In February 2021, Baroness Kishwer Falkner was appointed as Chair of the Commission. One former employee commented that Falkner had personally edited EHRC publications on trans people, making the documents more gender critical, contradicting the EHRC’s guidance on protecting people’s rights based on gender reassignment. Commenting on this, they said “one paper was so heavily edited by Falkner that it left people speechless. She changed the case studies, the language… it was so transphobic, there was no way it would get published.”

Concerns about the politicisation of the EHRC are not new. Given that the responsibility for appointing commissioners lies with the Secretary of State for the Government Equalities Office, there have been ongoing concerns about political influence being exerted on the Commission. The appointments of commissioners such as Swaran Singh, David Goodhart, and Jessica Butcher sparked similar worries. Only a year ago, former Chair David Isaac commented that the EHRC was being pressured to support the Government’s policy agenda.

However, the backlash that the regulator is now receiving from the LGBT+ community is more significant. Were the UN to review the EHRC and find the body to be in violation of the ‘Paris Principles’ (which lays out the role and functions of national human rights institutions), it could lead to the revoking of its independent status.

Were it to be found by the UN that the watchdog had been politicised and influenced by the Government Equalities Office, this could spell disaster for the Government.  With the UK hosting the Safe To Be Me Conference this summer (a global conference on LGBT+ equality), any downgrade of the EHRC’s ratings would only exacerbate to what may perceive to be the UK’s ongoing regression as a global leader on LGBT+ issues.

While the UK’s reputation as a socially progressive country was strong on the back of the Marriage (Same Sex Couples) Act of 2013, the same is not true now. In late January, the Parliamentary Assembly of the Council of Europe (PACE) identified the UK as notable for “extensive and often virulent attacks on the rights of LGBT+ people” in recent years, placing the UK alongside Russia, Poland and Hungary as places where this was of most concern, in particular singling out the rising anti-trans rhetoric in UK Government.

However, as we move towards the Safe To Be Me Conference, it is clear that this won’t be the end of the conversation.

Opinion: The Not So Mini Reshuffle

Rishi Sunak reshuffles the deckchairs following sleaze investigation into former Conservative Party Chairman. Will anyone care outside of Westminster?

Just two weeks until new community facilities including the Bingham Arena, Rushcliffe open their doors to the public.

We use cookies on our website to give you the most relevant experience by remembering your preferences and repeat visits. By clicking “Accept All”, you consent to the use of ALL the cookies. However, you may visit "Cookie Settings" to provide a controlled consent.
Cookie SettingsAccept All
Manage consent

This website uses cookies to improve your experience while you navigate through the website. Out of these, the cookies that are categorized as necessary are stored on your browser as they are essential for the working of basic functionalities of the website. We also use third-party cookies that help us analyze and understand how you use this website. These cookies will be stored in your browser only with your consent. You also have the option to opt-out of these cookies. But opting out of some of these cookies may affect your browsing experience.
Necessary Always Enabled
Necessary cookies are absolutely essential for the website to function properly. These cookies ensure basic functionalities and security features of the website, anonymously.
Functional
Functional cookies help to perform certain functionalities like sharing the content of the website on social media platforms, collect feedbacks, and other third-party features.
Performance
Performance cookies are used to understand and analyze the key performance indexes of the website which helps in delivering a better user experience for the visitors.
Analytics
Analytical cookies are used to understand how visitors interact with the website. These cookies help provide information on metrics the number of visitors, bounce rate, traffic source, etc.
Advertisement
Advertisement cookies are used to provide visitors with relevant ads and marketing campaigns. These cookies track visitors across websites and collect information to provide customized ads.
Others
Other uncategorized cookies are those that are being analyzed and have not been classified into a category as yet.
SAVE & ACCEPT

Never miss an issue by subcribing to our newsletter!

Receive our latest insights and all future journals as soon as they are published and get invited to our exclusive events and webinars.

Receive our latest insights as soon as they are published and get invited to our exclusive events and webinars.